Hymns from the Hive Reviews

Layne Redmond and Glen Velez are largely responsible for spreading the American modern frame drum movement that began in the late 1970s. Although many are familiar with the virtuoso approach of Velez and many of his students, Redmond’s contribution to frame drumming is just as important. In her work with Velez, some of those early compositions were more collaborative than is commonly known. Without a background in music, Redmond’s ability to memorize and play such intricate music with Velez spoke to her impressive abilities. As a teacher of modern frame drumming, she has been around the globe, with her students numbering in the thousands. Her career in frame drumming established her as an artist that differed from the typical soloist. Out of all of her work, Hymns from the Hive (her 9th CD) shows this most clearly along with her continued artistic growth.

This CD features Redmond on a variety of frame drums: tar, bendir, riqq, lap style bodhran, and assorted percussion and voice.Tommy Brunjes (“Tommy Be”) is featured on kanjira with Ubaldo Oliveira on pandeiro, Eduardo Mota on surdo, and Everton Isidoro on berimbau throughout. Several tracks are peppered with guest artists whose contributions give the album much more substance than one would find on a typical new age recording. Although listeners of new age music will surely enjoy this intricate music, “new age” is simply not an applicable term to describe this music. Remember the last time you had to keep listening carefully to tracks on a CD to analyze the meter so you can figure out what’s going on? Well, that’s what I had to do on this recording! And it was well worth the effort.

Layne’s rhythmic sense is full of surprise with her interlocking frame drum tracks carefully arranged so that her rhythms in 10, 6, 12, and even 4 beats are highly original. The music itself is also carefully layered with long, flowing melodic lines and improvisation balancing the more intricate percussion. Featured throughout are such notable musicians as Vicki Richards on violin and Amitava Chatterjee on voice, both of whom give a strong North Indian flavor to the album. Vocalists Mariella Santiago and Marcela Belas are featured alongside Tadeu Mascarenhas on a variety of keyboards, and the electric guitars of Alex Mesquita recall a Peter Gabriel/Robert Fripp-like soundscape.

Present throughout are recordings of honey bees (provided by percussionist Paul “River” Guerguerian) providing introductions and drone-like functions to several tracks. The music tuned to the sound of bees is an interesting effect, and this CD is mesmerizing, keeping the listener’s attention throughout. Although the legacy of Glen Velez is clearly present—the intricate meters, tuned and interlocking frame drums, clean technique—Layne Redmond clearly has her own voice as an artist, connecting ancient and ageless inspirations with modern music making. 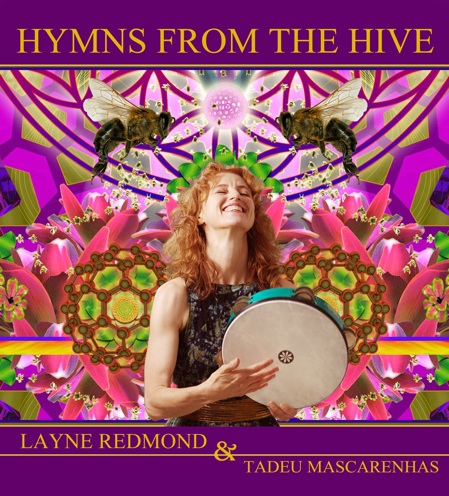